Being a research project, there are different people working in different areas of the project. The project is basically divided into the Layout, Pragmatics, and the Semantics parts, but we also have a bunch of demonstrators and even a number of projects useful to end users published as part of OpenKieler: 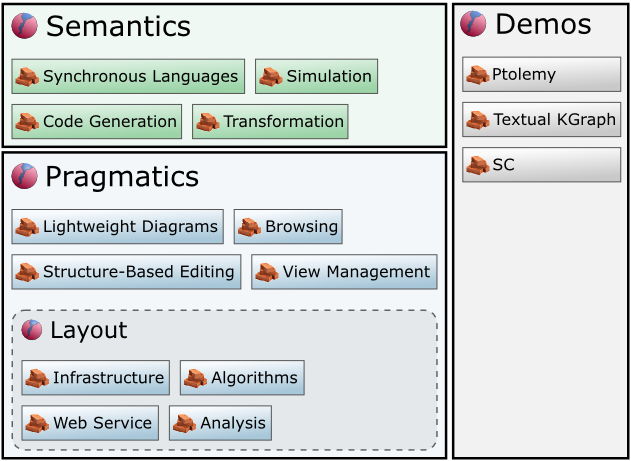 The layout area is a part of KIELER Pragmatics and provides the foundation for pretty much everything else in KIELER. Much effort in the Pragmatics area has gone into freeing the user from so-called "enabling steps": things a developer has to do to prepare for the model change he actually wants to make. This will usually be things like moving nodes around to make space for other nodes, taking care of edge routing etc. Good layout algorithms are necessary to be able to free the user from tasks like this that don't actually contribute anything to the final model.The core

component is KIML, the Kieler Infrastructure for Meta Layout. KIML provides the connection between graphical editors on the one hand, and layout algorithms on the other hand. Besides integrating various open source graph layout libraries such as OGDF and Graphviz, KIELER also includes custom layout algorithms in KLay, the Kieler Layouters component. The most important and most advanced algorithm is KLay Layered, a layer-based layout algorithm targeted primarily at the layout of data flow diagrams. However, KIELER also includes KLay Force, which provides implementations of force-based layout algorithms, as well as a KLay Planar, a planarization-based algorithm. Our custom layout algorithms are implemented in pure Java and can easily be adapted to be used outside of Eclipse as well. There's also the KWebS component, which makes our layout algorithms available as a web service. Finally, GrAna, our graph analysis component, allows us to compute a whole lot of different metrics for diagrams, which is handy when it comes to evaluating the performance of our layout algorithms.Our layout infrastructure and algorithms are available under the umbrella of the Eclipse Foundation as the Eclipse Layout Kernel (ELK) project.

We also provide an infrastructure to define execution semantics for a meta model. This can be a simulator based on C (see S/SC projects) or Ptolemy (see KlePto project). Simulators can easily be integrated using the KIELER Execution Manager (KIEM). We also support textual simulations (see Esterel and S project). Another recent main contribution are SCCharts. To get an overview about all projects concerning semantics in KIELER follow the link below.