Visualize the Simulation State with an SVG Image

The Data Pool View shows all variables present in the simulation. However it can be difficult for humans to interpret the state of a model when having only a load of numbers and variables. The former KIELER Environment Visualization (KEV) had been developed to display the simulation state in a more pleasant way. Therefore KEV loaded an SVG image and could manipulate it to reflect the state of the simulation.

This approach has been developed further in KIELER Visualization (KiVis) to integrate with the new simulation. Furthermore a DSL for kivis files has been created to configure how the SVG image will be manipulated.

In this section the open-source vector graphics program Inkscape is used to illustrate how to create an SVG image that can be used with KiVis.

It is advisable to first set the document size. In Inkscape this is done under File > Document Settings. In the image below the size is set to 512x512 px. This setting defines the coordinate system of the file, which is useful when animating, e.g., movement later. Anyhow, SVG images can be scaled to any size. 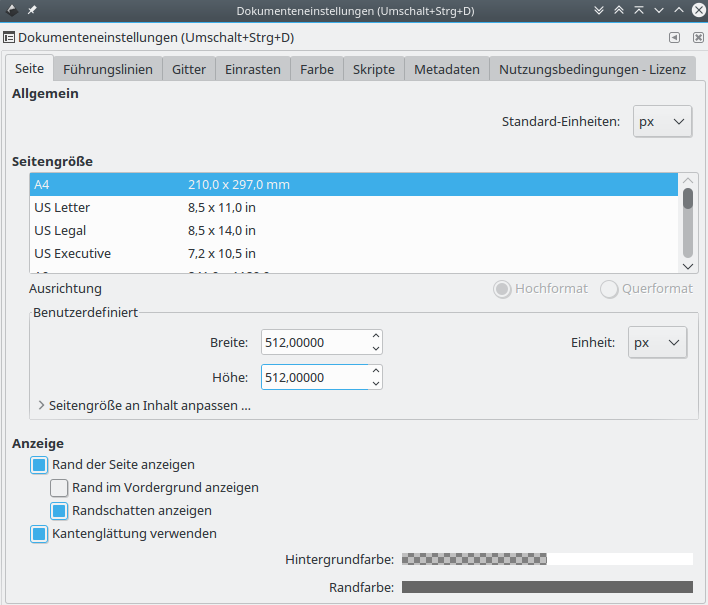 Afterwards three circles and a rectangle have to be created. The circles will simulate the red, green and yellow lights of a traffic light, and thus are colored accordingly. The rectangle will show the same information, but using different animations. 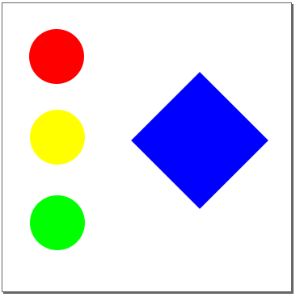 After the elements of the image have been created, it is necessary to give elements that should be animated a unique name. This can be done in Inkscape by selecting the object and using Right click > Object properties. In the window that opens, an id can be set in the first field (the value without leading hash, labelled "Kennung" in german). Name the circles according to their color, theRedOne, theYellowOne and theGreenOne. The rectangle gets the id theRect.

Note that a new id has to be applied using the button in the object properties window! 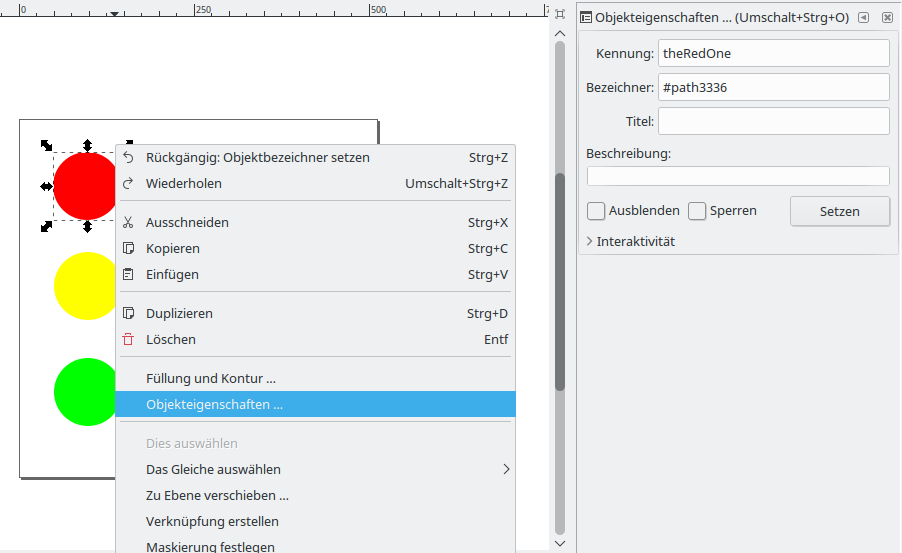 SVG is an XML format. Elements can be grouped and layers can be created which forms a hierarchy. When working with groups and layers in Inkscape, it can be useful to work with the XML-Editor (Ctlr+Shift+X).

In Inkscape it is possible to create a flowed text element, which is text that wraps its content inside a user defined area. However this is not a fully specified feature in SVG and thus not supported by many SVG viewers. For instance Gimp displays these elements as black box and Firefox does not display them at all.
KEV and the newer KiVis uses Apache Batik for SVG rendering, which also does not support flowed text. If you encounter issues with text object, try to convert them to simple text in Inkscape, via Text > Convert to normal text.

For more information see also the Inkscape FAQ for this topic: http://wiki.inkscape.org/wiki/index.php/Frequently_asked_questions#What_about_flowed_text.3F

Sadly the Batik SVG Renderer that is used in KIELER does not handle text colors as well as Inkscape does. When setting the fill color directly on a text element in Inkscape, it will not be displayed in the Simulation Visualization View. The text will be black.

However there is a simple workaround: Select the text objects that should be colored, group them (Ctrl + G), then set the fill color on this group. The child elements will inherit the color and (for whatever reason) this does also work in Batik.

The configuration depends on the model to be simulated. In the following a simple kivis file is shown for the example model below.

The animations of theRedOne / theYellowOne / theGreenOne is used to show this element (opacity is 1) when the showLight variable is 0 / 1 / 2 and to hide them otherwise (opacity is 0). This represents a very simple traffic light.

When writing a visualiation configuration, code completion can be used to show the available attributes of an animation. In the following the available animations are explained.

The attributes of this class are also available for all other animation handlers and provide generic features.

It is used to change the appearance of elements. The fill color, stroke color and with as well as opacity can be changed.

This animation can be used for text objects in the SVG to set the font and text.

This animation changes the position of an SVG element.

This animation changes the rotation of elements.

This is a powerful animation to position SVG elements, because the position can be drawn as path in the svg itself.

Attributes can be set to a single constant value, a single variable in the simulation or using a more complex mapping from variable values to attribute values as shown in the example below.

Interaction with the Simulation

It is also possible to interact with the visualization. For the image that has been created above, a simple interaction could be configured as follows:

This illustrates that animations and interactions can be used with the same SVG element, which is theRect in this case.

The interaction that is setup in this example is a click listener for theRect. If the element with this id is clicked, the variable showLight will be set to 1 and the simulation will perform a macro tick. However this is only done when the condition holds. Thus the simulation will not be stepped, if the showLight variable already has a value of 1.

There are also pre-defined functions to interact with the visualization environment. In the following example the variables color, a, r, g and b are set to the corresponding color values of the pixel on position x and y in the svg image. The pixel position is determined by the document size of the svg, which can be defined for example in Inkscape (File > Document Properties).

Create an empty SCChart and fill it with the following content:

This model will set the variable showLight successively to 0, 1 and 2.