To verify the continous work will be correct, a Junit regressiontest was implemented.

In these test a model (SCL) and the corresponding ESO file is needed. The test will generate a VHDL component from the model and a testbench from the ESO file and test them against each other. This will be done for all models that are stored in the models repository (if it is completely programmed

The main thing that is needed is the ISE Suite. It contains a compiler to compile the SCL-VHDL file and a simulator (ISIM) to test the SCL-VHDL-Model.

A very big advantage is that the ISE compiler and simulator can be controlled by a shell command. As we want to control and start this test with eclipse, this interface will be used. So Eclipse is additional needed. The whole test is a JUnit test.

This JUnit test, test all models in the appopriate repository. For every test a JUnit error trace will be generated. By this way it is traceable which models testing fails or work.

A very good thing is that the JUnit error trace contains the missed assertions. So it is exactly traceable where the failure appeared.

The ISE compiler is accessable through a shell command. To get the compiler to work, we must give the compiler a set of parameters.

The object file is an executeable file which is needed for simulation.

The project file (prj) contains all vhdl that are needed for the current compile process. In our test case these are all file that describe the model and the testbench file.

The project file contain all relevant vhd file which are needed for a succesfull compile. In this case the testbench file is also included because it should be tested afterwards.

Here an example of the project file is shown.

The abo.vhd corresponds to the SCL model and contains the component that behaves like the model. abo_tb.vhd is the generated testbench from core ESO file.

The command file contains simulation information. In this case we only need the time that the simulation must take.

Here an example of a command file:

To run everything automatically, a batch file was generated, which executes the compiling and simulation process.

Here an example of such a batch file:

And how does the simulation works? Here is a little control flow diagram which expresses what will be done with each model that will be tested. 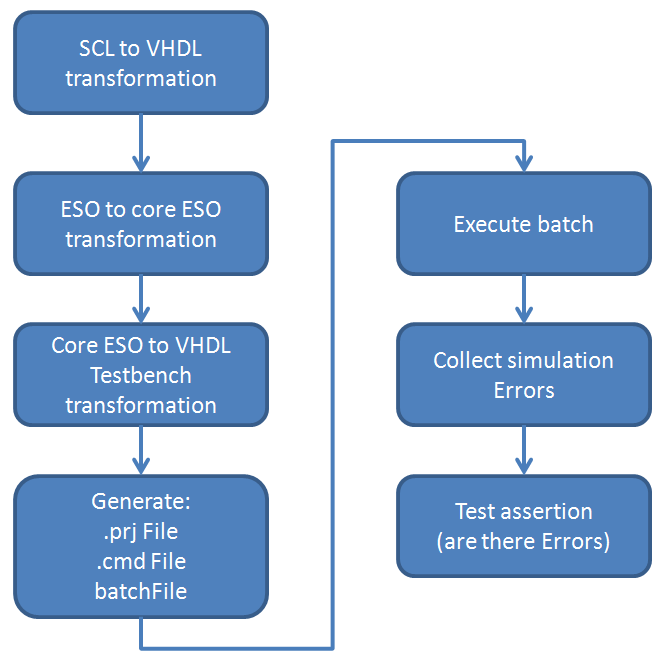 For every model which should be tested, a folder with its model name is created. The generated files will be saved to this folder. These folders won't be deleted after the test, they will be deleted befor a new test take place. So it is possible to look at these folders for more information if there are any errors.