Skip to end of metadata Go to start of metadata
Deprecated since 0.12

This sub project implements an interface of the KIELER project for the simulation and execution of graphical domain specific models (e.g., EMF models). It itself does not do any simulation computation but bridges simulation components, visualization components and a user interface within the KIELER Eclipse rich client platform. To get a first impression about this sub project please feel free to watch the following  Flash demo video.

Find the official JavaDoc documantation of the KIELER Execution Manager.

Check out the KIEM Eclipse plug-in project and enable it in your run configuration. Make sure to enable all required projects and to include all DataComponents you wish to use e.g., for visualization or simulation (s.b.).

How does it work? 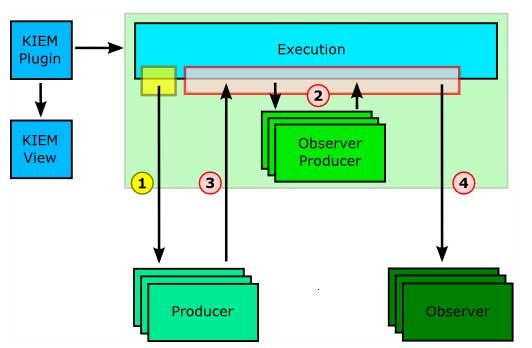 All components have in common that they are called by the Execution Manager in a linear order. This can be defined by the user in an execution setting and exactly reflects the order of the DataComponent list in the KIEM View shown in the example figures below. Because the execution is an iterative process --- so far only iteratable simulations are supported --- all components (e. g., a simulation engine or a visualizer) should also preserve this iterative characteristic. During an execution KIEM will stepwise activate all components that take part in the current execution run and ask them to produce new data or to react to older data. As KIEM is meant to be also an interactive debugging facility, the user may choose to synchronize the iteration step times to realtime. However, this might cause difficulties for slow DataComponents as discussed below.

If you want to contribute a simulation or execution engine or any visualization facility to the KIELER project, you just need to understand about the two Extension Points that are explained below:

If you take a look at the class diagrams of the extension package, you will see that there are 5 methods that every DataComponent needs to supply:

The first method is called during the initialization phase, that is, the execution is about to begin (but not yet has begun). This happens when for example the user clicks on play, step or the pause button in the GUI or such function is triggered by a Master DataComponent. This method can be used to do some initialization work that needs to be done prior to the execution, like saving opened files, doing some model transformations or resetting some data.

The second method (wrapup) is called when the execution has stopped and enables a component to provide some cleanup code that needs to be executed.

The method step() is called during the execution. It depends on the interface that is implemented what kind of data is passed as a parameter (JSONString or JSONObject) and also what (same!) kind is expected to be returned by the implementation. The parameter of the step() method contains the requested data. It depends on the following:

The methods isProducer() and isObserver() must be implemented and should return a boolean value indicating whether the DataComponent wants to receive any data (s.a.) or produces data or even both. There is a possibility of so called Initialization DataComponents that neither receive nor produce any data but only are used during the initialization and wrap-up phase when their initialize() and wrapup() method is called.

Take in mind that if your DataComponent is not both, an observer and a producer of data, it's step() method will not be called in a blocking scheme during the scheduled execution (for details please see above). If this is required, then you need to set the according return values to both being true.

DataComponents may provide properties that enable the user to configure them prior to an execution run. To do so, a DataComponent needs to @Overrride the method provideProperties() that returns an array of elements of the type KiemProperty. There are several build-in types like for String, Integer, Boolean values or for a list of choices, a file browser or for selecting an open editor. The following code should demonstrate the use of those build-in properties.

Please note that all values are the canonical string representatives and hence all property values need to be serializable. This is also required for own property types that can easily be created when deriving from the abstract class KiemProperty. A custom KiemProperty needs to implement the IKiemProperty interface and hence to provide the following two methods:

The Object values of the first two methods depend on the cell editor used by this property type. By default this is the TextCellEditor that handles Strings. You can @Override the provideCellEditor() method and provide another cell editor here. For example the ComboBoxCellEditor operates on integer values. Take in mind that only the String representation, that is accessible thru a call to KiemProperty.getValue()/KiemProperty.setValue() is the one that will be stored and should be unique to be distinguishable.

With overriding the provideIcon() method you are able to provide a customized Image for the KiemPropertyType. If you return null (which is the default) the standard image will be used.

The following lists the most important packages and classes of the KIELER Execution Manager.

This should give an overview about the base packages of the KIEM project:

Please feel free to browse the source and the JavaDoc documantation for further more detailed information.

This illustrates the famous ABRO example, the "hello world" of the synchronous world. It is simply a Java plug-in implementing an observing and producing DataComponent that reacts to signals A, B, R with producing a present signal O whenever signal A and B just became present (in any order or even at the same time). The SyncChart then goes into the done state and is reset by signal R, i.e. it becomes ready and again waits for signals A and B. The strong abortion of the reset transition indicates that whenever R is present, in the same tick no O will be produced. 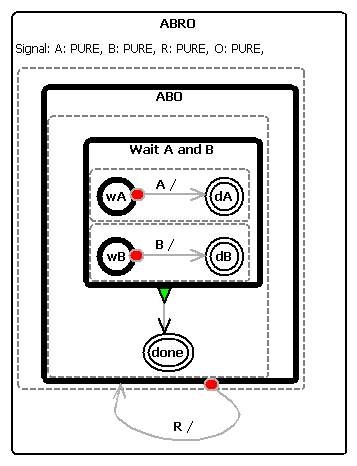 The above example observer and producer DataComponent can be executed by the execution manager. This is illustrated in the following screen snapshot. Signals can be injected (= made present) by marking the check boxes [X] in the left raw table view. Note that the variables first have to be declared as being signals by using the adequate toggle button. By using the step button of the execution manager the execution can proceed to the next step. The Synchronous Signal Resetter DataComponent just resets all present signals at the beginning of the next tick to be absent again so that the whole execution follows the synchronous semantics. An alternative to this could be to let all signal emitters reset their own signals with the drawback of introducing relative (macro) ticks. 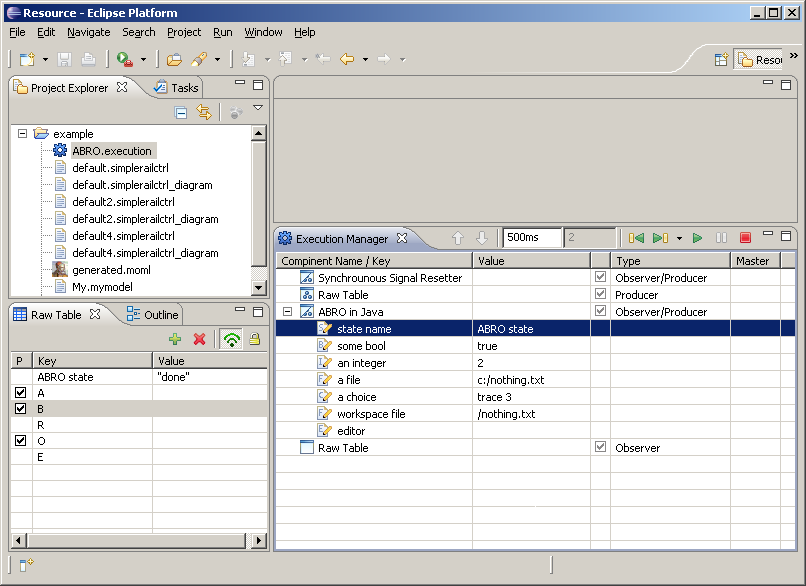 As another case study there exists a SimpleRailControlEditor for the  model railway of the Christian-Albrechts University of Kiel. It lets you create controllers for the model railway by modeling them with a generated Eclipse GMF editor. These models can be transformed into executable C-Code by a model2text-Xpand-transformation on the one hand. On the other there exists a complete Xtend-transformation which generates executable and I/O-equivalent  Ptolemy models out of them. The SimpleRailCtrl Ptolemy Simulator DataComponent is then capable of executing these Ptolemy models using the  Triq Ptolemy Eclipse plug-in. Together with the KIELER model visualizer the active states (nodes) of the controller model can then be illustrated during the execution. 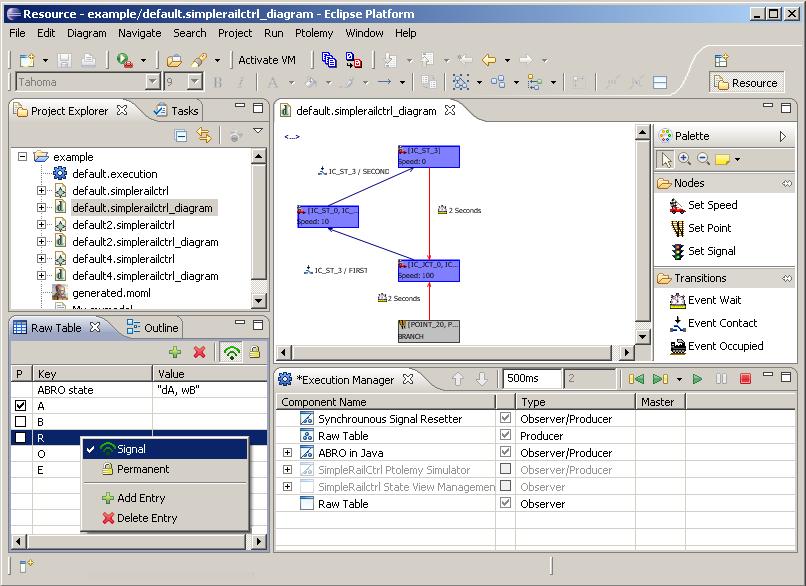 There also exists a  demo video that shows the just described behavior. Whenever the execution is being initialized the Ptolemy simulator will transform the currently saved EMF model of the opened diagram into a semantically equivalent but executable ptolemy moml-File.