This page describes the architecture and the different phases of the KLay Layered algorithm, as well as some notable features that may require further explanation.

To get an idea of how KLay Layered is structured, take a look at the diagram below. The algorithm basically consists of just three components: layout phases, intermediate processors and an interface to the outside world. Let's briefly look at what each component does before delving into the gritty details. 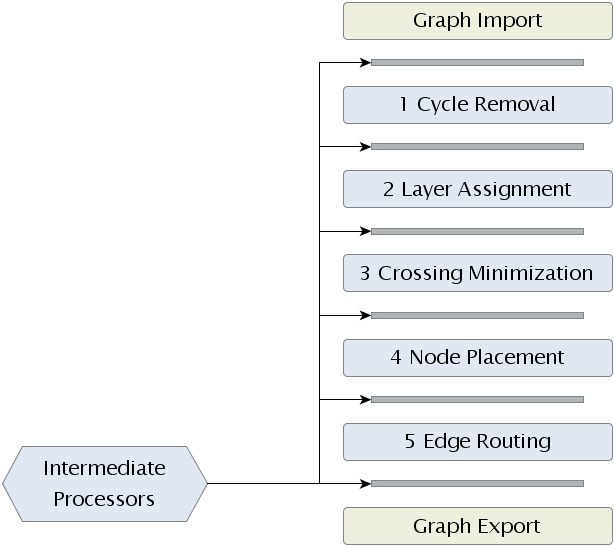 As will be seen below, the task of phase 2 is to produce a layering of the graph. The result is that each node is assigned to a layer in a way that edges always point to a node in a higher layer. However, later phases may require the layering to be proper. (a layering is said to be proper if two nodes being connected by an edge are assigned to neighboring layers) Instead of modifying the layerer to check if a proper layering is needed, we introduced an intermediate processors that turns a layering into a proper layering. Phases that need a proper layering can then just indicate that they want that processor to be placed in one of the slots.

This section describes the algorithm's five main phases and the available implementations. You can find a list and descriptions of the intermediate processors below.

The first phase makes sure that the graph doesn't contain any cycles. In some papers, this phase is an implicated part of the layering. This is due to the supporting function cycle removal has for layering: without cycles, we can find a topological ordering of the graph's nodes, which greatly simplifies layering.

An important part to note is that cycles may not be broken by removing one of their edges. If we did that, the edge would not be routed later, not to speak of other complications that would ensue. Instead, cycles must be broken by reversing one of their edges. Since the problem of finding the minimal set of edges to reverse to make a graph cycle-free is NP-hard, (or NP-complete? I don't remember from the top of my head) cycle removers will implement some heuristic to do their work.

The reversed edges have to be restored at some point. There's a processor for that, called ReversedEdgeRestorer. All implementations of phase one must include a dependency on that processor, to be included after phase 5.

The second phase assigns nodes to layers. (also called ranks in some papers) Nodes in the same layer are assigned the same x coordinate. (give or take) The problem to solve here is to assign each node x a layer i such that each successor of x is in a layer j>i. The only exception are self-loops, that may or may not be supported by later phases.

Note that nodes can have a property associated with them that constraints the layers they can be placed in.

The objective of phase 3 is to determine how the nodes in each layer should be ordered. The order determines the number of edge crossings, and thus is a critical step towards readable diagrams. Unfortunately, the problem is NP-hard even for only two layers. Did I just hear you saying "heuristic"? The usual approach is to sweep through the pairs of layers from left to right and back, along the way applying some heuristic to minimize crossings between each pair of layers. The two most prominent and well-studied kinds of heuristics used here are the barycenter method and the median method. We have currently implemented the former.

Our crossing reduction implementations may or may not support the concepts of node successor constraints and layout groups. The former allows a node x to specify a node y!=x that may only appear after x. Layout groups are groups of nodes. Nodes belonging to different layout groups are not to be interleaved.

Our node placers may or may not support node margins. Node margins define the space occupied by ports, labels and such. The idea is to keep that space free from edges and other nodes.

In the last phase, it's time to determine x coordinates for all nodes and route the edges. The routing may support very different kinds of features, such as support for odd port sides, (input ports that are on the node's right side) orthogonal edges, spline edges etc. Often times, the set of features supported by an edge router largely determines the intermediate processors used during the layout process.