KIML defines a whole set of standard layout options that many layout algorithms support. When an option is supported by an algorithm, that algorithm may override the option's default value. Algorithms may also provide more specialized documentation for layout options.

Beside a user-friendly name, layout options are defined by the following properties:

User options are those that you can see in the "Layout View" available in Eclipse if the KIML user interface is installed. That view is restricted to layout options that are supported by the currently active layout algorithm. Furthermore, some options are visible only when the Show Advanced Properties button is active in the view.

Programmatic options are such that are meant to be configured exclusively through the KIML API. They should not be visible in the user interface.

A few properties are used as additional information in the output of a layout algorithm. This information should be considered when the layout is applied to the original diagram

This section explains every layout option in more detail.

The Most Important Options

While most layout options are used to affect how the active layout algorithm computes concrete coordinates for the graph elements, there are some layout options that have a special role in KIML. 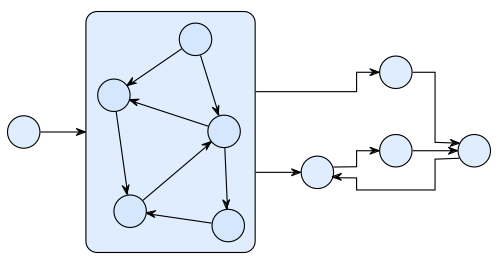 Diagram types are used to classify graphical diagrams for setting default layout option values for a set of similar diagrams. The diagram type of an element is specified with the layout option de.cau.cs.kieler.diagramType. Layout algorithms can declare which diagram types they support well, and give a priority value for each supported type. KIML decides at runtime which layout algorithm has the highest priority for a given diagram, so that the most suitable algorithm is always used. Usual values for such priorities are between 1 and 10, where the highest value should only be assigned if the algorithm is especially designed for diagrams of the respective type, or if it has proven to be very adequate for them. Lower values should be given if the algorithm is able to draw the diagrams correctly, but with lower quality of the resulting layout.

The following diagram types are predefined:

This option influences the way in which edges are routed between the nodes they connect. The following settings are available: 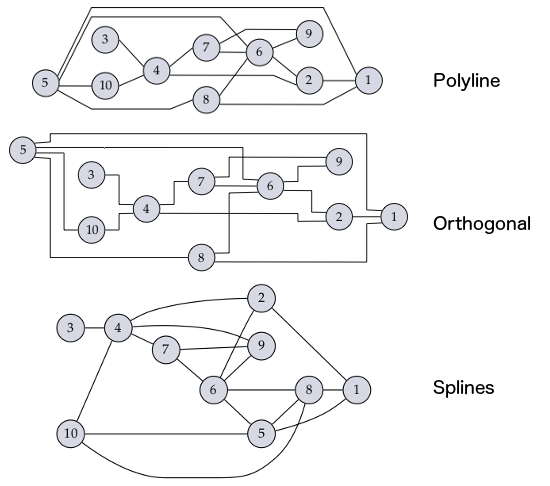 When used as layout option, the edge routing is set for a whole graph or subgraph, i.e. on a parent node. However, the property is additionally used for the output of the layout algorithm in order to mark individual edges. If the edge routing assigned to an edge is anything other than SPLINES, the bend points of that edge are interpreted with their normal meaning, i.e. straight lines are drawn between consecutive bend points. If, on the other hand, a layout algorithm marks an edge with the value SPLINES, the bend points have to be interpreted as control points for a series of cubic splines following this procedure:

This option controls the usable space for ports on each side: 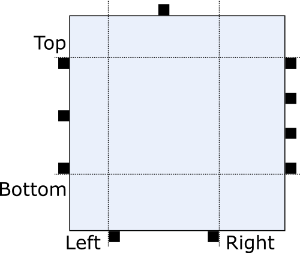 If the option is not set, the value of Port Spacing is used instead for all four components.

This option is only relevant if port constraints are FREE, FIXED_SIDE, or FIXED_ORDER. If size constraints include PORTS, the additional port space, together with the port spacing and the size of ports, determines a lower bound on the node size.

Determines the alignment of a node in relation to other nodes of the same row or column. For layer-based algorithms, for instance, this option controls how a node is positioned inside its assigned layer.

The aspect ratio of a drawing is the ratio of its total width to its total height. This option gives some control over that ratio, although in most cases it is only interpreted as a hint on how to arrange multiple connected components, hence the actual aspect ratio will probably be different from what has been specified with the option.

A node that is marked as comment box is treated as a label that needs to be placed somewhere. In contrast to normal node labels (modeled with a KLabel instance), comment boxes may have connections to other nodes, as in the following example. 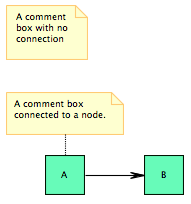 A node that is marked as hypernode has a special role in the graph structure, since all its incident edges are treated as parts of the same hyperedge. Example: relation vertices in Ptolemy models.

If this option is supported and active, the layout algorithm is requested to process the full hierarchy contained in the input node. This means that instead of executing another algorithm on each hierarchy level, all levels are arranged in a single algorithm execution.

Elements that are marked with this option are excluded from layout. This is used to identify diagram objects that should not be regarded as graph elements.

The port alignment controls how ports are distributed over their respective edge.

This option is only relevant if port constraints are FREE, FIXED_SIDE, or FIXED_ORDER.

The following settings are possible:

Port alignment can also be set as specialized options portAlignment.{north|south|east|west}. These options overwrite the general policy for the respective side. Setting one of these to UNDEFINED defaults it to the general port alignment.

Since ports have a size, we need a concrete point inside the port that edges should start or end in. In KLay Layered, this is referred to as the port anchor. By default, the center of each port is used as its port anchor, but this behavior can be overridden by setting an explicit port anchor.

The port offset is used to specify how much space a layout algorithm should leave between a port and the border of its node. This is usually zero, but doesn't have to be. If the offset is not defined for a given port, a layout algorithm can try to infer the offset from the port's coordinates and its node's size in the input graph. This of course requires both properties to be set to sensible values.

Set this property if one of the following cases applies:

The port spacing determines how much space KLay Layered should leave between the ports of each side. This option is only relevant if the node size depends on the ports, that is, if the size constraints include SizeConstraint.PORTS.