KLay Layered supports a whole bunch of layout options. Every single one of them is documented here.

This section explains every layout option in more detail. See the KIML documentation for more information on KIML layout options. Those options are only mentioned here if KLay Layered adds some custom behavior.

By default, KLay Layered tries not to add bendpoints to an edge at positions where the edge doesn't change direction since there's no real bend there. Turning this option on forces such bend points. More specifically, a bend point is added for each edge that spans more than one layer at the point where it crosses a layer. If hierarchy layout is turned on, a bend point is also added whenever the edge crosses a hierarchy boundary.

Determines how the content of compound nodes is to be aligned if the compound node's size exceeds the bounding box of the content (i.e. child nodes). This might be the case if for a compound node the size constraint of MINIMUM_SIZE is set and the minimum width and height are set large enough.

This option is not tested for external ports with port constraints FIXED_RATIO or FIXED_POS.

Crossing minimization determines the ordering of nodes in each layer, which influences the number of edge crossings. This option switches between one of several algorithms that can be used to minimize crossings. Possible values are:

KLay Layered tries to position nodes in a way that all edges point rightwards. This is not possible if the input graph has cycles. Such cycles have to be broken by reversing as few edges as possible. The reversed edges end up pointing leftwards in the resulting diagram. There are different cycle breaking algorithms available: 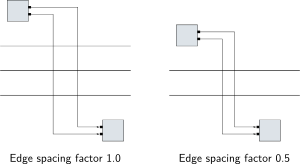 The BRANDES_KOEPF node placement algorithm computes several different node placements. One of the placements is chosen by the algorithm, usually the one that takes the least amount of space. With this option, a particular result can be chosen.

This option should usually be left alone.

Interactive layering, crossing minimization, and cycle breaking algorithms use node positions to sort nodes into layers or to determine the order of nodes in each layer. However, it is unclear if for example the top left corners of nodes should be compared, or the bottom left corners — different settings might lead to different results. The interactive reference point determines which part of nodes is used to compare their positions. It provides the following settings:

The layer a node is placed in is usually computed by the layer assignment algorithms. However, sometimes certain nodes need to be placed in the first or in the last layer (for example, nodes that represent inputs from the outside). The layer constraint option can be set on such nodes to do just that.

This option can also be set to FIRST_SEPARATE and LAST_SEPARATE. These are for internal use only and should not have been publicly exposed in the first place. Using them can result in layout problems.

This is a very advanced layout option that you normally shouldn't worry about.

Delimits the amount of depth-first-search iterations performed by the network simplex layering strategy. Large, highly connected graphs might require a long time to be processed. This property serves as a timeout after which an exception is raised.

In the KGraph model, edges can either connect to nodes through ports or directly. In the latter case, KLay Layered will introduce a virtual port for each edge, which results in all edges connecting to the node at different points in the final drawing. If this option is switched on, KLay Layered will only generate up to one input and one output port for each node. The option is set on a parent node and applies to all of its children, but not to the parent node itself. 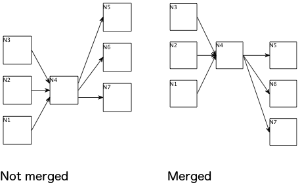 If hierarchical layout is active, this option is the hierarchical equivalent to Merge Edges. If set to true on a compound node, all hierarchy-crossing edges that start or end inside that compound node are eligible for merging.

Decides which algorithm is used to compute the layer each node is placed in. We have different algorithms available, with different optimization goals:

Decides which algorithm is used to compute the y coordinate of each node. This influences the length of edges, the number of edge bends, and the height of the diagram. We have different algorithms available, with different optimization goals:

There are heuristics in use all over KLay Layered whose results often improve with the number of iterations computed. The thoroughness is a measure for telling KLay Layered to compute more iterations to improve the quality of results, at the expense of performance.