Mr. Tree is structured the same as its big brother KLay Layered. It consists of layout phases, intermediate processors, and a connected components processor. The picture below describes the control flow and therefore what is done when the tree algorithm operates. 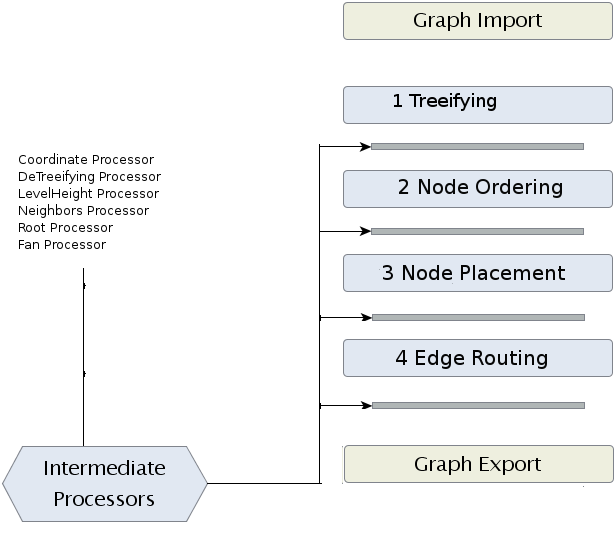 The architecture aims to separate most main steps for layouting a tree and to solve the layout taks by the divide and conquer principle. The individual steps are structured as following.

The heart of Mr. Tree are the following phases. They are described in more details on this page.

The first phase is named which the comparatively unfamiliar term "treeifying". "Treeifying" is a word that describes a process that builds a tree out of a graph that is no tree. In other words: Mr. Tree should also operate on graphs that are no trees, but that can be converted into trees. Imagine a graph that is nearly a tree. It contains one cycle that destroys the tree property. Now the first phase should detect that cycle, destroy it by removing the edge that destroys the tree property and reinsert that edge again after the tree algorithm was able to operate on that newly build tree.

Phase two and three calculate a place for every node in the layout. In phase two the nodes are ordered. Their ordering depends on the weighting of each nodes. That means that nodes with many offspring and many following levels should be placed before nodes that do not have that many offspring or following levels. Phase two computes such a node ordering. Phase three then places the nodes. For placing the nodes, we use the algorithm developed by Walker et al. They developed a node positioning algorithm for general trees, that calculates x-coordinates for each node. This coordinates depend on many factors, such as position in a tree, number of offspring/ancestors and so on. A more detailed look can be found in the paper of Walker et al. which we also referenced in the Literature Section of this page.

The last phase of Mr. Tree is a simple edge-routing that simply connects the previously placed nodes directly.