Welcome to the second tutorial! We will work our way through installing a proper Eclipse setup and developing a first very basic layout algorithm. The layout algorithm will integrate with KIML (KIELER Infrastructure for Meta-Layout), our very own framework that connects graphical editors with layout algorithms. Once you're finished, you should be able to create new Eclipse plug-ins and know how to write layout algorithms for KIML. And you should have a running Eclipse-based application that should look something like this: 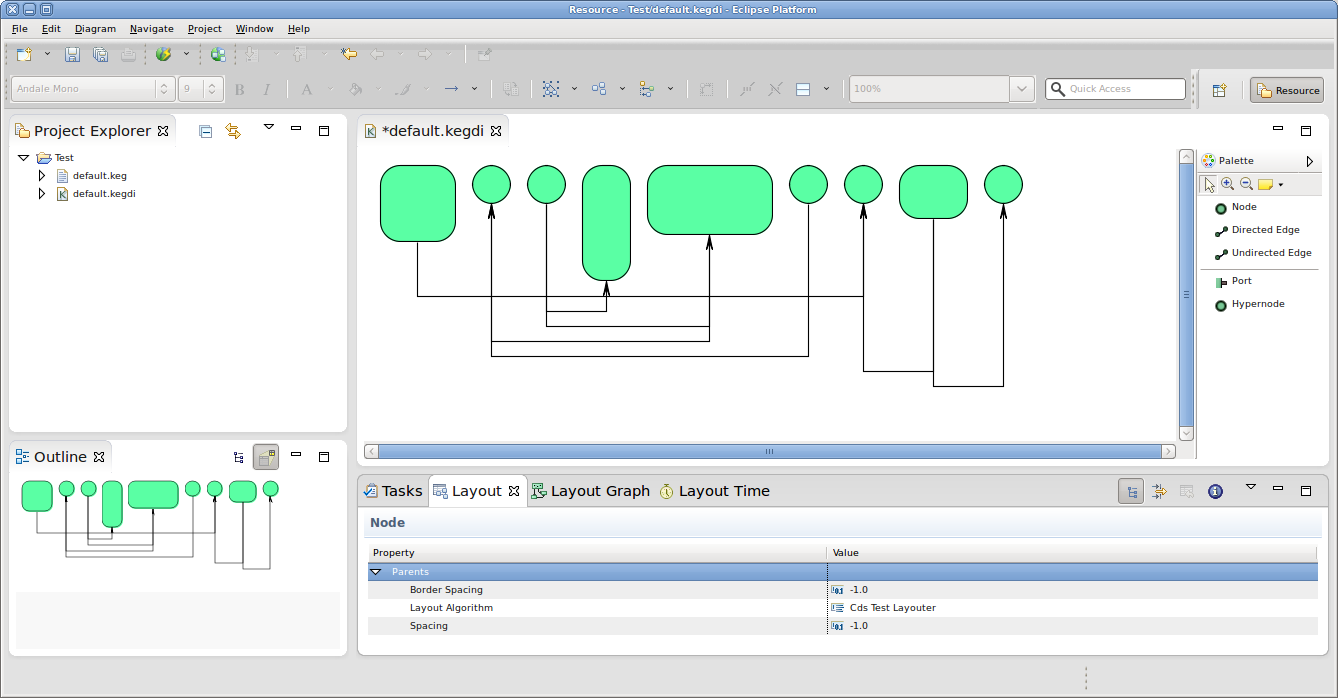 There's a few things to do before we dive into the tutorial itself. For example, to do Eclipse programming, you will have to get your hands on an Eclipse installation first. Read through the following sections to get ready for the tutorial tasks.

For this tutorial, we need you to have Eclipse and Git installed:

Over the course of this tutorial, you will be writing a bit of code. Here's a few rules we ask you to follow:

During the tutorial, we will cover each topic only briefly, so it is always a good idea to find more information online. Here's some more resources that will prove helpful:

You will find that despite of all of these resources Eclipse is still not as well commented and documented as we'd like it to be. Finding out how stuff works in the world of Eclipse can thus sometimes be a challenge. However, this does not only apply to you, but also to many people who are conveniently connected by something called The Internet. It should go without saying that if all else fails, Google often turns up great tutorials or solutions to problems you may run into. And if it doesn't, Miro and I will be happy to help you as well.

As far as KIML and layout algorithms are concerned, you can always refer to our Wiki which has a section about KIML and the KIELER layout projects. The documentation is not complete, however, so feel free to ask Miro or Christoph Daniel for help if you have questions that the documentation fails to answer.

We have created a Git repository for everyone to do his tutorials in. You can access the repository online through our Stash tool over here. Clone that repository:

You will use this repository for all your tutorial work, along with everyone else. To make sure that you don't interfere with each other, everyone will work on a different branch. This is not exactly how people usually use Git, but goes to demonstrate Git's flexibility... Add a branch for you to work in:

You have just added and checked out a new branch. Everything you commit will go to this branch. To push your local commits to the server (which you will need to do so we can access your results), do the following:

You would usually have to enter git pull first, but since nobody will mess with your branch anyway this won't be necessary. By the way, you only need to mention origin login_name with the first git push, since Git doesn't know where to push the branch yet. After the first time, Git remembers the information and it will be enough to just enter git push.

If you want to develop a layout algorithm using KIML, you will have to get your hands at the KIML source code first. Of course, the code is available through a Git repository.

KIML is implemented as an Eclipse plug-in that you will have to import into your Eclipse workspace. We won't do this now; it will be one of the first steps in the development of your layout algorithm.

Now that the preliminaries are out of the way, it's time to develop your first layout algorithm! It will, however, be a very simple one. This tutorial focuses on creating Eclipse plug-ins and on learning how to develop with KIML; thinking of and implementing cool layout algorithms is what the rest of the practical will focus on, and that is where the fun will be had!

Setting Up Your Workspace

You will start by importing the plug-ins necessary to program with KIML.

We need to create a new plug-in to implement the layout algorithm in. Switch back to the Java or Plug-in Development perspective and follow these steps:

You should now commit your new, empty project to the Git repository. We will do that from within Eclipse.

When writing our layout algorithm, we are going to need to be able to access code defined in several other plug-ins. To do that, we need to add dependencies to those plug-ins:

Layout algorithms interface with KIML by means of a layout provider class that has to be created and registered with KIML.

Before you can test your layout code, you will have to register your new layout provider with KIML.

We will now have to add a new run configuration that will start an Eclipse instance with your layout code loaded into the application, ready to be used.

Test the layouter in your new Eclipse instance:

You can see the direct output of your algorithm and the time it took to run it through the Layout Graph and Layout Time views. The views are available through the de.cau.cs.kieler.kiml.debug plug-in, which can be found in the plugins-dev folder of the KIML repository. You will learn more about debugging layout algorithms in a layout tutorial or presentation.

Once you're satisfied with your node placement code, it's time to take care of edge routing.

Here's a few tips for implementing the edge routing:

Once you're done implementing the edge routing code, test it by running your debug configuration again, as before.

Before You Run Away...

...don't forget to commit your layout algorithm to your repository, and to push your commits to the tutorial repository on our server. If it's not there, we won't be able to see your work!