LEGO Mindstorms with leJOS and SCCharts

Several open-source, third-party replacements for the offical Lego firmware have been developed. These support many well known programming languages, such as Java, C/C++, Python, Lua, etc. In the following we will use KIELER SCCharts to program Mindstorms running the Lego Java Operating System (leJOS). Therefore we will first install leJOS NXJ and flash its firmware. Afterwards we will create a simple SCCharts project in KIELER that we will compile and deploy to the NXT brick.

If you want to learn the SCCharts langugage first, you can follow these links:

Download and extract the newest archives for your Operating System from Sourceforce (Linux/Mac) or use the Setup.exe (Windows).

The further installation is explained in detail at http://www.lejos.org/nxt/nxj/tutorial/Preliminaries/GettingStarted.htm.

Do not forget to flash the download leJOS firmware to the Mindstorms brick as explained in the tutorial!

On Linux there is an issue when uploading the firmware because of a kernel module (http://ubuntuforums.org/showthread.php?t=1123633). If you can't upload the firmware with your Linux OS, add blacklist cdc_acm at the very end of the file /etc/modprobe.d/blacklist.conf. Afterwards execute sudo rmmod cdc_acm. This will remove the cdc_acm module from the kernel and prevent its restart. Now try to flash the firmware again.

Another issue is that the development package of libusb has to be installed. On Ubuntu you can do this by using sudo apt-get install libusb-dev.

Furthermore, to use USB connection, a java library has to be compiled via ant. To do this perform cd /path/to/leJOS/build and start ant. If the ant build tool is not installed on your system, you can do so via sudo apt-get install ant.

The setup.exe of the current LEGO Fantom driver for Windows (1.2.0) has an awkward issue. If you get an error message (Developer Error) because an .msi file could not be found, don't panic. The file is part of the downladed archive (in the Products folder) but you have to start it manually.

The leJOS NXJ tools require a 32 Bit version of Java. However, newer 32 Bit versions of Java are not longer available for Mac. Thus to use leJOS the installation of Java 1.6 is required, which is the last one that supports a 32 Bit mode. You can download the installer for Java 1.6 from https://support.apple.com/kb/dl1572?locale=en_US. It will install Java 1.6 to /System/Library/Frameworks/JavaVM.framework/Versions/1.6.0/Home so that the environment variable LEJOS_NXT_JAVA_HOME, which is set in the installation instructions, points to the correct path.

A simple Hello World application for the Mindstorms is developed as part of the leJOS tutorial http://www.lejos.org/nxt/nxj/tutorial/Preliminaries/FirstProgram.htm

If this works with your device, you are able to start using KIELER to develop applications for the NXT brick.

Download and unpack the nightly build of KIELER for your OS. It is available at the Downloads page.

Note: Java 1.8 is needed on all operating systems. With Java 1.7 not all plugins of KIELER will be loaded. Furthermore on Windows, you will need to download the 32 Bit version of KIELER – even if you have a 64 bit operating system! Otherwise flashing the brick and uploading to the brick will fail.

The Eclipse plugin for leJOS

There is an Eclipse plugin for leJOS which adds a project creation wizard and launch configuration to the platform. 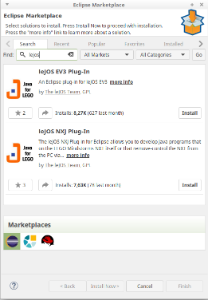 Tip: To speed up the installation, uncheck the option "Contact all update sites during install to find required software". This will reduce the installation time from drastically (around 30 seconds instead 10 minutes).

For EV3, the plugin requires the IP address to connect to the brick (it may work without, but its safer to directly set the name. Reduces headache

). Check Connect to named brick and enter the IP adress of the brick (displayed on the brick at startup).

The following shows how to create a project, which will turn on a light if a button is pressed.

Change the contents of the model file to the following code and save it.

This model will start in the state lightOff. If the button is pressed, it will turn on the light and change to the corresponding state, where the light is turned off, as soon as the button is not pressed anymore.

The annotations on the input and output variable are used to define which wrapper code is used to set / read them. @Wrapper TouchSensor, S4 will set the input variable to true iff the touch sensor on the port S4 is pressed. @Wrapper Floodlight, S1 on the output variable will turn on the red led of the light sensor that is attatched to port S1 iff the variable is true.

Note: The Floodlight of the EV3 has a pretty high latency when switching between on and off.

The model is now ready to be compiled. Compilation is done in the background when the project is built. There are two ways to build a project: manually using Project > Build Project, or automatically via Project > Build Automatically. If the automatic build is enabled, resources are built when they are saved.

Building the project will create a new folder kieler-gen in which all results are saved. This includes the compiled code from the model, an executable simulation for the model and wrapper code that is ready to be deployed to the Mindstorms Brick.

The simulation is saved as JAR file in kieler-gen/sim/bin and can be started via Right Click > Run as > KIELER Simulation. Models and variables of a running simulation are displayed in the Data Pool View. 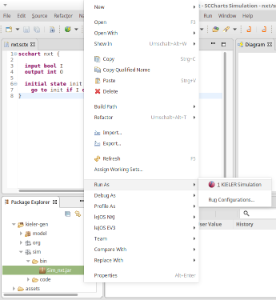 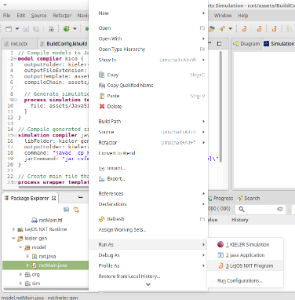 Excluding the Simulation from the NXT Build

It is necessary to exclude the simulation directory and org.json directory inside kieler-gen from the NXT project specific build via Right Click > Build Path > Exclude. Afterwards the project has to be build again to remove all error markers in these directories. 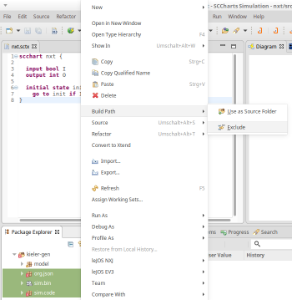 Normally the NXT project attempts to compile all Java files in the kieler-gen directory for the platform. However, the simulation that is generated is not targeted at the Mindstorms brick and has compilation errors. It is compiled separately by KIELER.

There are several wrapper code snippets that can be used as annotations on input and output variables in the model file. These snippets are inserted in the main file template as part of the project build. The available snippets are listed below.

The display of the NXT brick is rather small compared to a Monitor. To ease debugging, one can print to a Remote Console (RConsole), if the USB cable is connected. This enables easier collection for example of sensor data.

To use the RConsole, uncomment the RConsole lines in the wrapper code template Main.ftl. Start the nxjconsoleviewer tool in the bin directory of your leJOS installation. Now, when starting the application, the brick tries to connect with the nxjconsoleviewer. Press the Connect button. If connected succesfully, RConsole.println(...) commands will be written to this window.

The EV3 brick has a similar feature. However it does not require any code changes. Just run the ev3console program in the bin directory of your leJOS installation from command line. The output of the brick will be printed to this command line.

The following presents typical issues and how to solve them.