In order to build up your own diagrams by means of KLighD we suggest to install some of our provided features from our update site http://rtsys.informatik.uni-kiel.de/~kieler/updatesite/release_pragmatics_0.10.0: (If you seek for diagrams with nodes and edges connected via ports (as depicted in Figure 2 in Just Model! - ...), there's a new example illustrating this that is not part of our latest release. Hence, refer to the latest nightly build, or checkout our source code (get the repository url via 'Clone' in the upper right corner)): 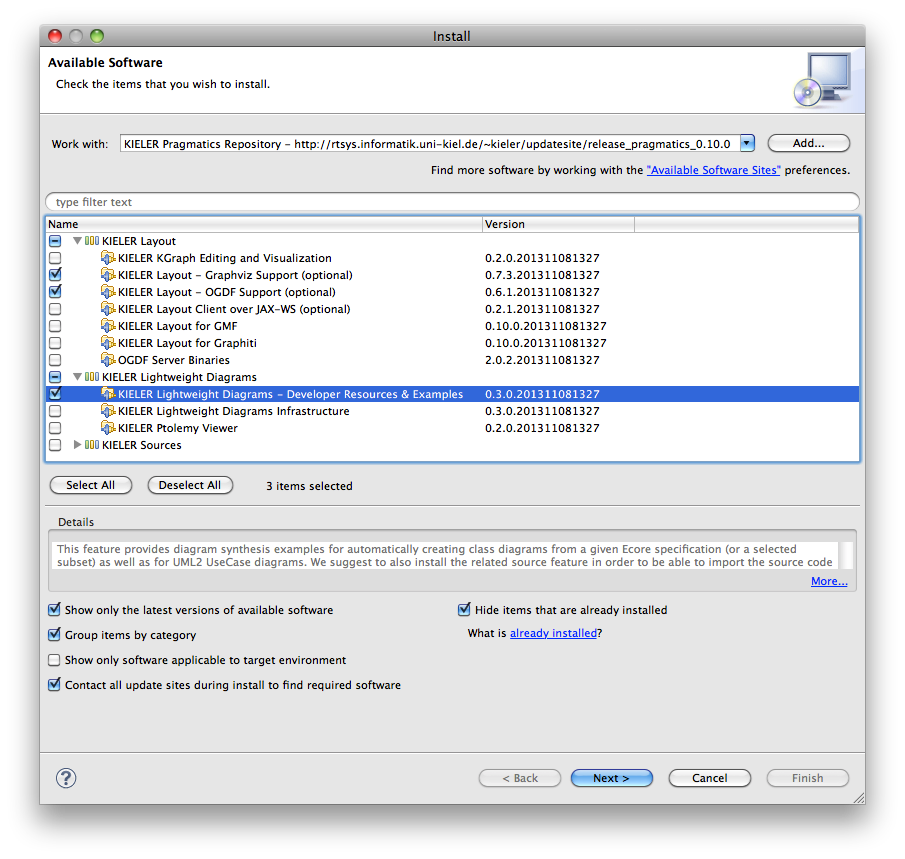 In order to let the framework draw your desired diagrams for representing given data we need to tell KLighD how obtain nodes, edges, and hierarchy levels from the provided data. To this end we need to implement a so called diagram synthesis. Getting an initial stub of such an implementation is most easiest done by means of our KLighD project wizard (if the entry is not visible, switch the perspective or close and reopen it, or simply choose Other... → KIELER Light-weight diagrams): 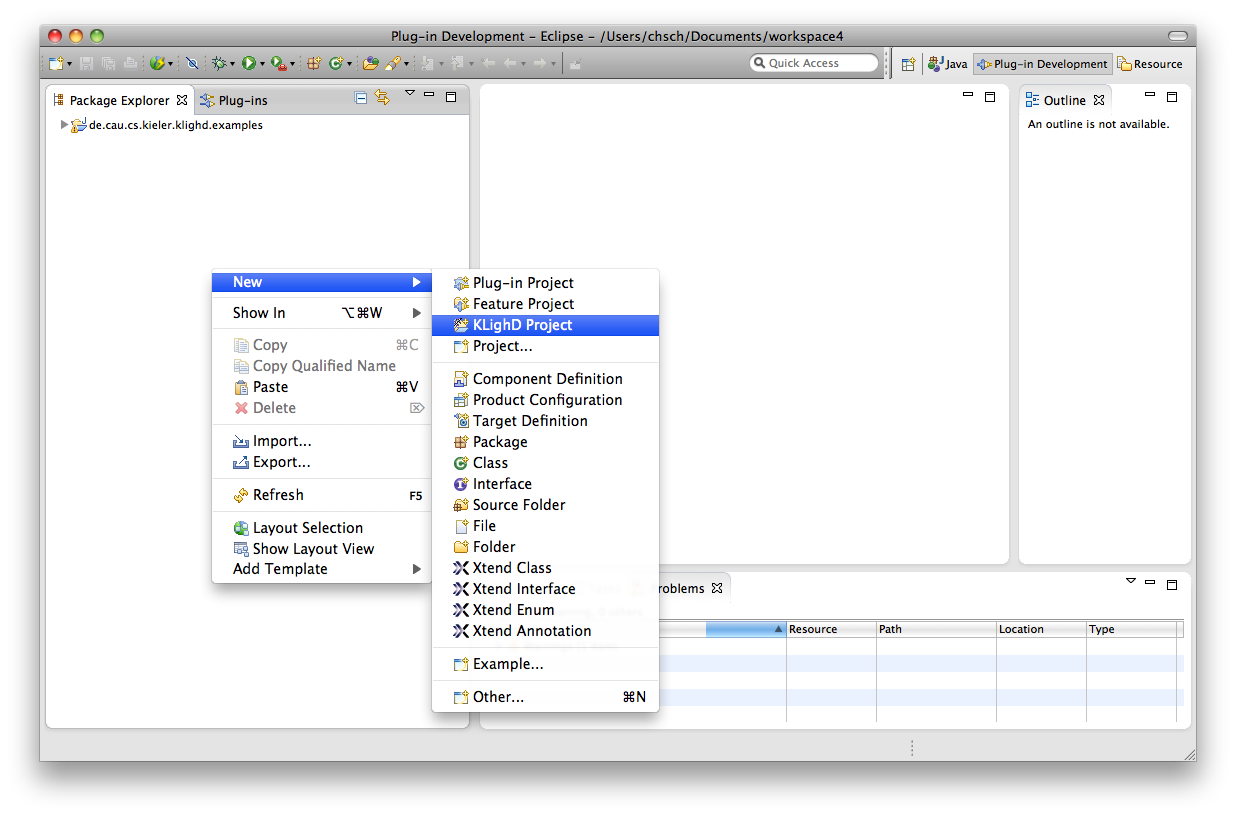 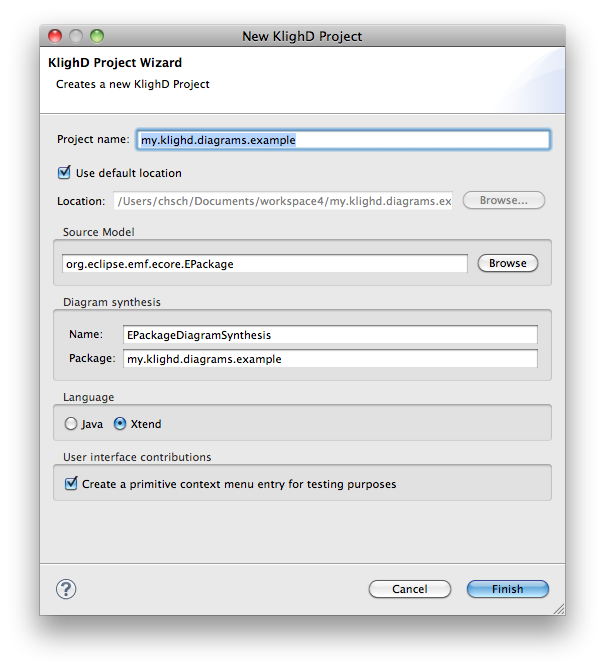 You will get the following implementation template, it is already registered at KLighD's dedicated extension point (see the project's plugin.xml). 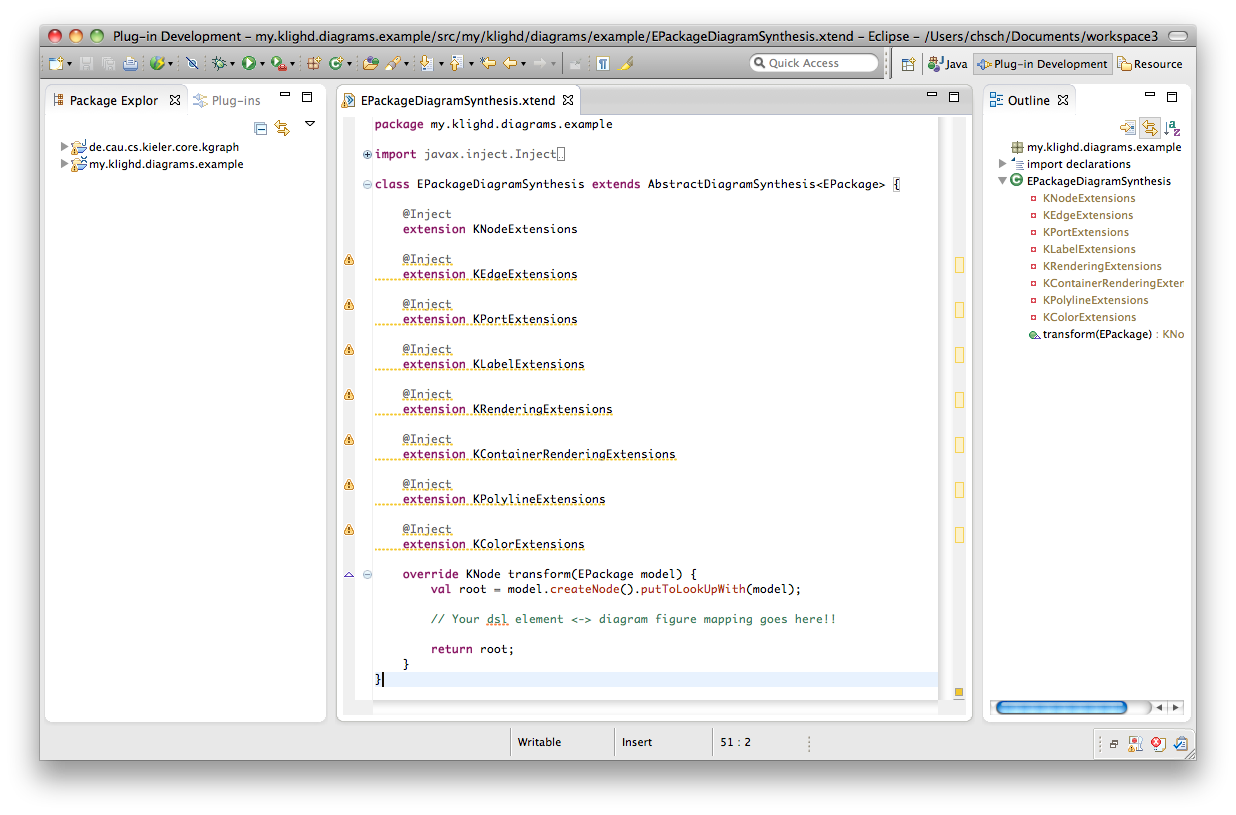 Create a KNode (via createNode()) for each element comprised by the given instance model (usually called the business, domain, or semantic model) of your data type, here EPackage. Add those nodes to the children of root. Create a KEdge for each relation or link to be contained in your diagram. Similarly to createNode() there is createEdge() for that purpose. Set source and target node of those edges accordingly, this will implicitly add the edges to the diagram (via EMF's EOpposite mechanism). You can reveal an already created node representing a certain domain element by calling domainElement.getNode(), or simply domainElement.node. Have a look at UML2UseCaseDiagramSynthesis, which is part of our examples project, on how to do that. If you interested in diagrams with nodes and edges connected via ports (as depicted in Figure 2 in Just Model! - ...) have a look at CircuitDiagramSynthesis. Note that this example is not part of our latest release yet so install a nightly build (sorry for its bugs

) or checkout our source code (get the repository url via 'Clone' in the upper right corner). 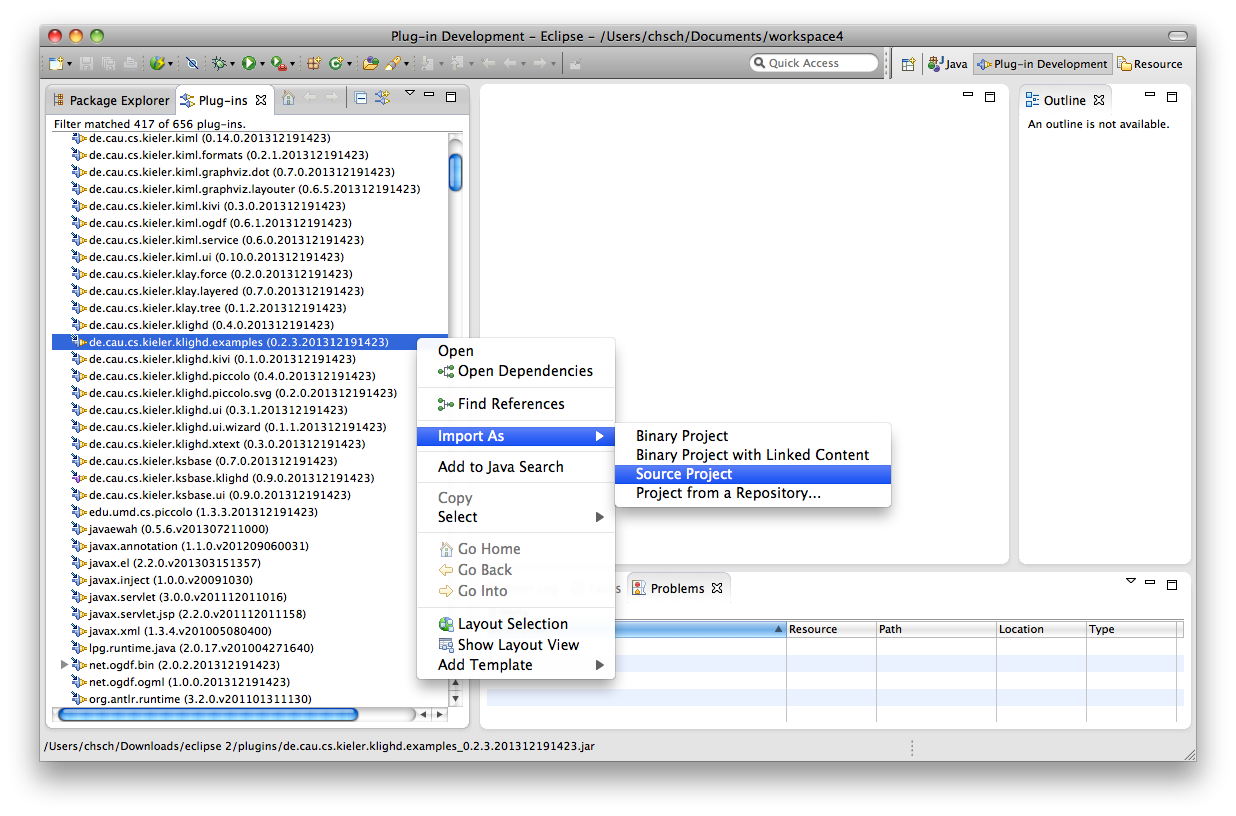 Testing the diagram synthesis is most easiest done by means of some menu contribution. Here are some instructions using the Eclipse 3.X API: Register a command with some arbitrary id and a default handler. In the execute() method of your handler call

Exemplary use case diagrams created according to the UML2UseCaseDiagramSynthesis and the CircuitDiagramSynthesis are shown in following screenshots, the source UML & Circuit models are part of the examples project, too. 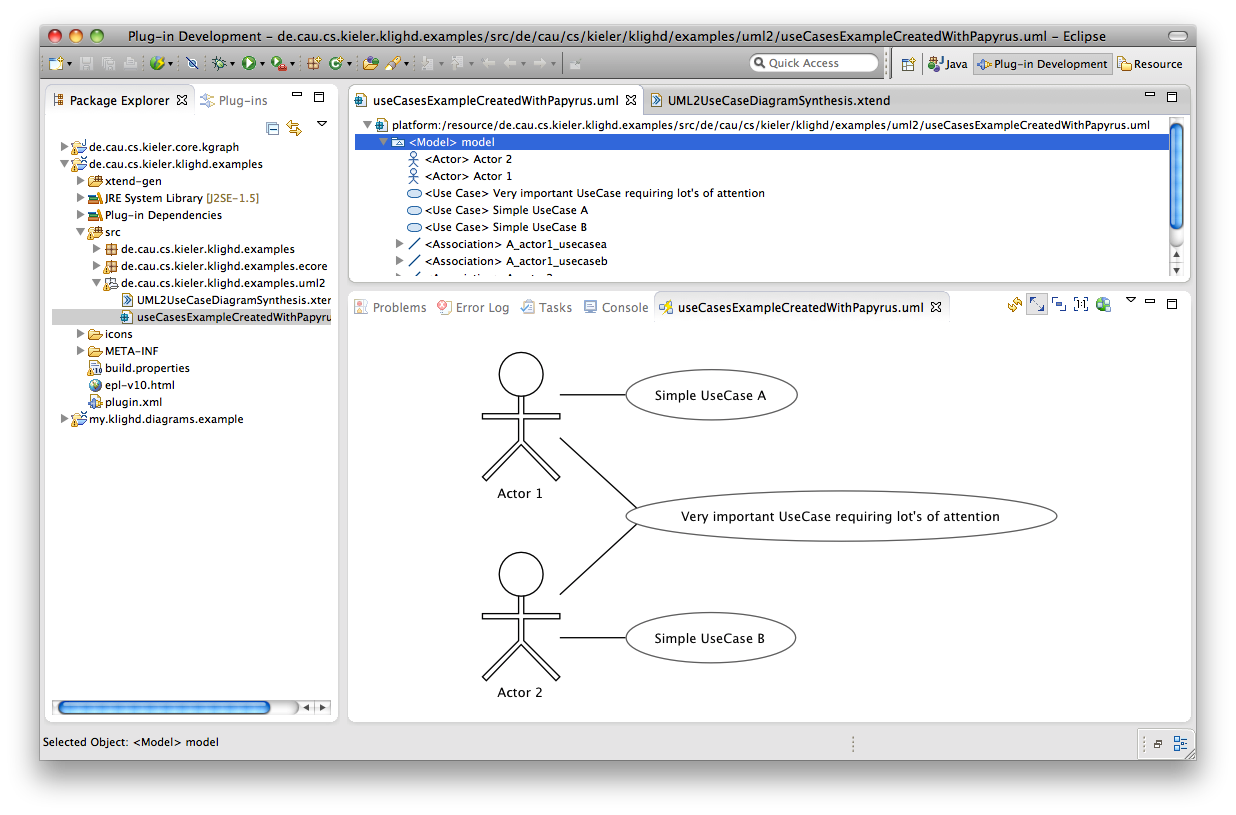 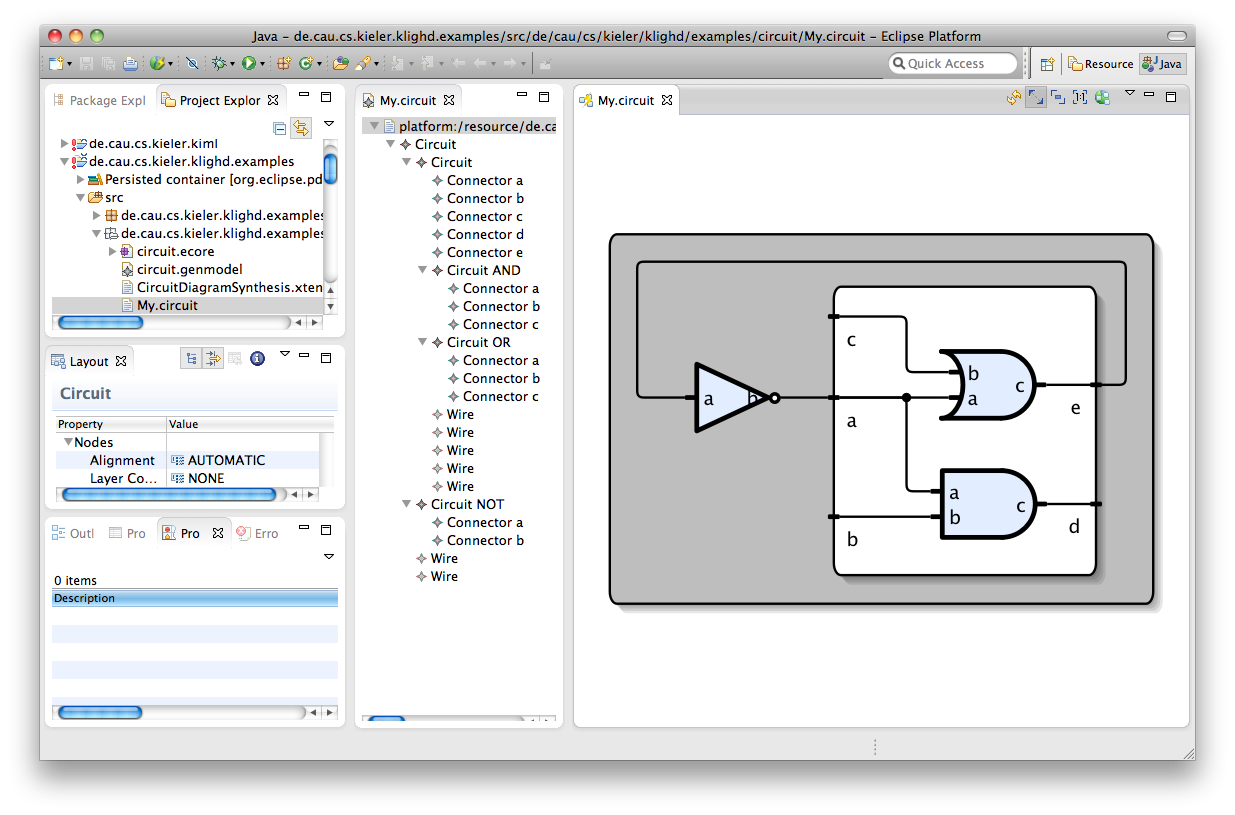 Now you might want to use some advanced features of KLighD diagrams, like sophisticated figure styling or diagram synthesis options. Details on that will follow soon, the EcoreDiagramSynthesis, which allows to create appealing class diagrams from Ecore model and which you will also find in the examples project, illustrates those features already. The following picture shows such a diagram, and a list of options for tailoring such diagrams in the side bar on the right. 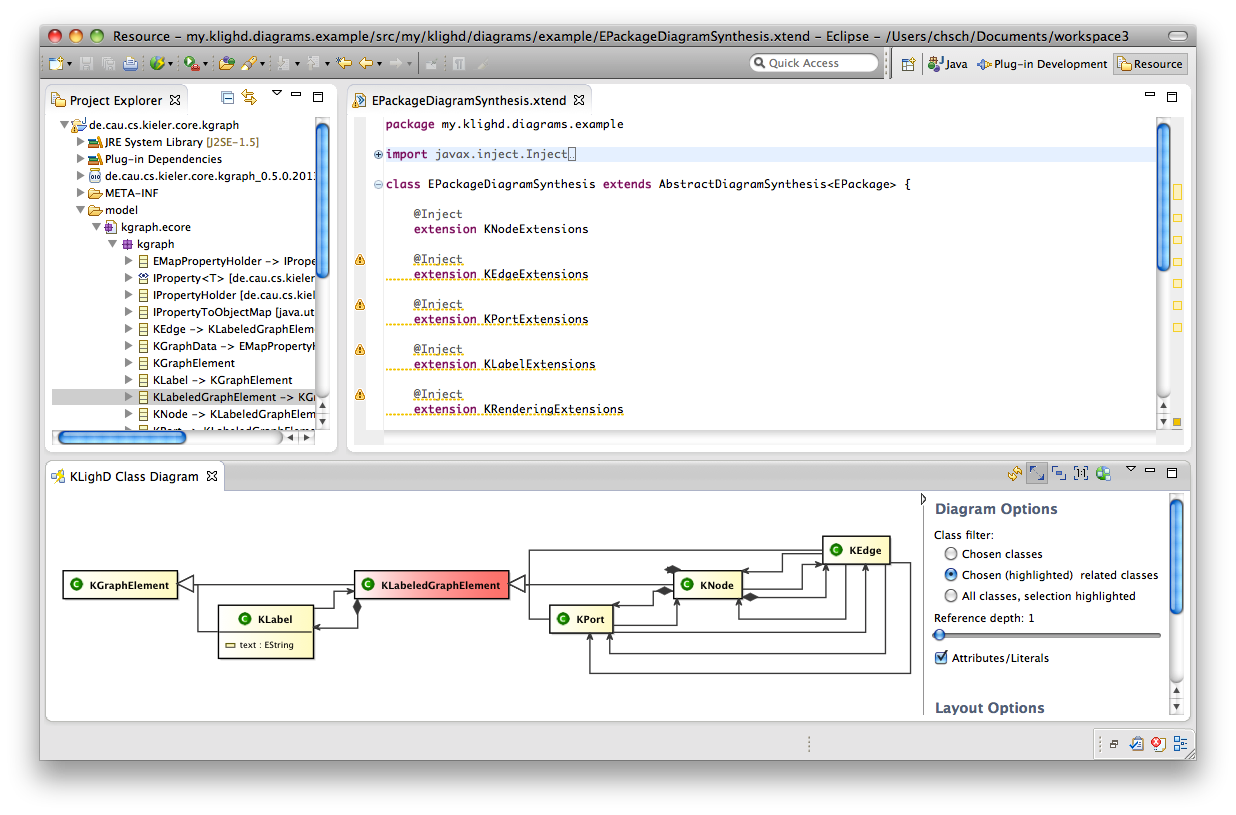